What is the Hanging Ninja Method?

The Hanging Ninja method is a visual recall technique I created while trying to memorize the 20 amino acids, their 1 letter codes, and which group they belong to. The only limitation to this technique is the extent of your ability to draw a somewhat simple image and be able to recall that image on demand. I have tested this method out on a few friends and after going through the method 1 time, on average, they could recall the amino acid name, their 1 letter code, and what group they belong to for all the common amino acids.

Besides the solid recall rate, this method allows you to achieve repetition in an entertaining way instead of memorizing a bunch of words with flash cards.

1. Familiarize yourself with the names of the 20 common amino Acids using the image below, but don’t spend too much time trying to recall all 2o amino acids right now. Notice that the letters G, A, L, and T are the first letter in more than one amino acid. This is the reason why 1 letter codes are not always easy to figure out.

Organizing the Amino Acids into Groups

On a piece of paper you must draw the image I designed to memorize the 20 common amino acids. Draw the image one piece at a time. The 5 pieces of the image represent the 5 classes of amino acid R groups.The image is made of simple geometric shapes(squares, circles) for people who are not artistically oriented. Don’t worry about the image being dull and boring right now. You will be able to add some life to it shortly. 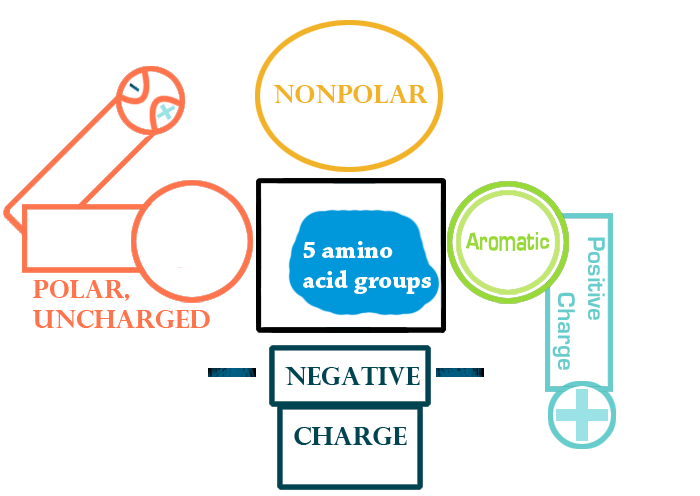 Learn the Amino Acids of Each Group

3. You should now have an image on your own paper showing the 5 amino acid groups. Now redraw the image without the names of the groups. This time put the first letter of every amino acid in the correct location on the figure as I have did below. The letters that are black represent unique 1 letter codes that don’t match the first letter of the amino acid.

Don’t just copy down what I have but, use it as sort of an answer key.Try to write the first letter of every amino acid in place by memory one group at a time. You should practice writing the first letter while saying the complete name of the amino acids in your head for about 5 minutes and then move on to step number 4.

A Poem for Audial Learners

4. With the skeleton and the letters in place, a mnemonic story will bring a little life to our drawing. Glance at the image you just redrew (with the letters) and read the Tale of the Hanging Ninja. *Notice that the first letters in bold type represent 1 letter codes that are different from the first letter of the amino acid name:

There was once a bold thief who walked like a Pimp

He jumped so many GAPS that he walked with a LIMP.

Disguised in the shadows his prey could not flee,

from the darkness a shrewd voice shouts “It’s a STiC UP G!”.

He even pirated the high water with perfection,

Until one day his luck ran out.

His Left Arm Hurt doing Karate Round Houses in a shootout!

Like poison down a drain our villain will no longer breathe

Off the Devils Exit he leaped, still trying to be A G.

5. Details. Right now you should have an image with the 5 classes of amino acids, an image with acronyms, and a rhyming story that makes the acronyms easier to remember. Now you can spice your image up with small details that tie back into the story.Remember to pay close attention to areas that have special 1 letter codes: Asparagine(N), Glutamine(Q), Phenylalanine(F), Tryptophan(W), Tyrosine(Y), Lysine(K), Arginine(R), Aspartate(D), Glutamate(E).

This is what I came up with below. This last step is NOT necessary but is the entertaining part in my opinion. Be creative and try to study in ways that will keep your attention.