The Stages of Mitosis Simplified

Overview of the Role of Mitosis

In the grand scheme of cellular life the stages of mitosis is simply responsible for the regeneration of cells in the exact form as its predecessor or parent cell. Thanks to mitosis mammals are able to continuously regenerate skin, hair, red blood cells, and repair wounds. We can even regenerate our liver to its original size from only 20 percent of its original mass through a form of mitosis known as mass proliferation. If your are interested in manipulating mitosis by the end of this article you might want to look at Genetic Engineering of children before they are born. Before mitosis can divide the DNA and organelles into 2 equal daughter cells, the cell must prepare itself. Right before mitosis occurs the cell is in a state known as interphase (“between phases”). During interphase the cell makes a copy of all its DNA. Please see my article about Interphase if you are unfamiliar with how this happens. Now that the cell has duplicated its DNA and organelles it can proceed into Mitosis. 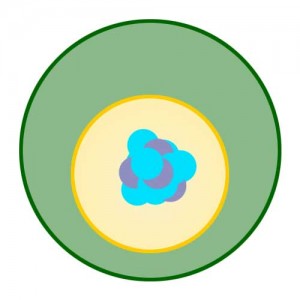 Simplified Stages of Mitosis and Cytokinesis:

During the prophase stage of mitosis the duplicated DNA condenses into compact structures known as chromosomes. Remember the DNA has already been duplicated. While the DNA is condensing into chromosomes, the nuclear envelope surrounding the DNA begins to break down. This happens so the DNA compacted into these chromosome structures can be accessed by the rest of the cell. 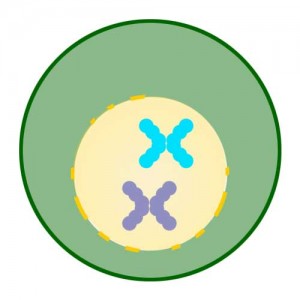 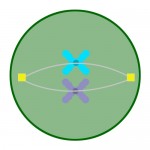 While in the anaphase stage of mitosis the centrioles will begin to pull each chromosome into two halves called sister chromatids. Each chromatid contains the same information. 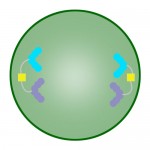 Finally in the Telophase stage of mitosis the nuclear membrane forms around the chromatids and they are completely located at opposite ends of the cell. 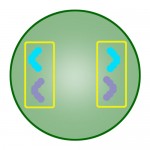 Usually after Telophase the cell will also divide its cytoplasm and pinch off into two separate but identical daughter cells. Each daughter cell is an exact copy of the parent cell before the DNA was duplicated during Interphase. 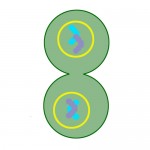