Smoking Black and Mild vs Cigarettes

Two popular sources of tobacco smoke are the Black and Mild and Cigarettes (many brands). As a college student who quit smoking I went to search for factual information on the 2 most popular types of tobacco that I saw people smoke. I wanted to know: 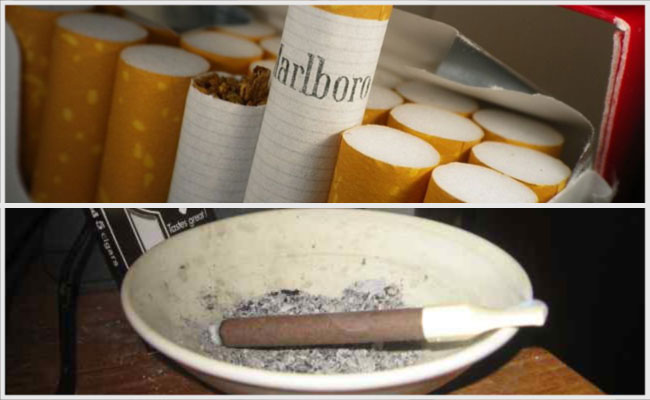 For more info on smoking and cancer,  see the difference between Tobacco and Marijuana.

A Black and Mild is a 4-6 inch cigar made of pipe tobacco rolled in a tobacco leaf. There is also a tip that may be wooden or plastic. Black and Milds are a type of cigar that is not meant to be inhaled. This is because the the type of nicotine it contains can be easily absorbed through the walls of your mouth similar to how a cough drop delivers medicine.

Modern cigarettes are typically filtered and contain processed tobacco and other additives wrapped in thin rolling paper. Cigarette smoke is inhaled into the lungs to deliver its nicotine.

Nicotine is naturally found in tobacco but many products on the market have extra nicotine added that will increase the likely hood of you purchasing the product again.

Chances of Getting Cancer

Whether you smoke Black and Milds or Cigarettes, the risk of tobacco smoke exposure are similar for all sources of tobacco smoke. The risks of developing disease symptoms depends on the intensity of your smoking habits.

However, smoking Black and Milds is not a safe alternative to smoking cigarettes. Both may lead to diseases such as heart disease, lung disease, pancreatic cancer, many more diseases.

Here are links to the studies conducted and referenced by the:

Credit to Nikita2706 for the picture of cigarettes.