Home » Biology » What are Atoms Simplified

What are Atoms Simplified

Understanding the Basics of Atoms

All living organisms are a collection of atoms and molecules bound together and interacting with each other through the forces of nature. Atoms are composed of smaller, subatomic particles.

Breaking Down the Atom

Atoms are the smallest functional units of matter that form all chemical substances and can’t be further broken down into other substances.

The simplest atom, hydrogen, is approximately one-millionth the diameter of a human hair. Each specific type of atom– nitrogen, hydrogen, oxygen– occurs as a chemical element.

The protons and neutrons are confined to a very small volume at the center of  an atom, the atomic nucleus, whereas the electrons are found in regions at various distances from the nucleus. 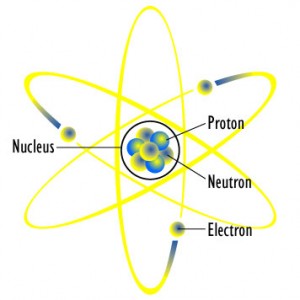 The numbers of protons and electrons in a given type of atom are identical, but the number of neutrons may vary.

Each of the subatomic particles has a different electric charge.

Protons have one unit of positive charge, electrons have on unit of negative charge, and neutrons are electrically neutral.
Because the protons are located in the atomic nucleus, the nucleus has a net positive charge equal to the number of protons it contains.

Electrons travel within regions surrounding the nucleus called orbitals. Another way to look at atoms is a nucleus surrounded by cloud-like orbitals.  The cloud represents the region in which a given electron is most likely to be found.

Orbitals  occupy energy shells or energy levels.  Atoms with more electrons have orbitals within energy shells that are at greater and greater distances from the nucleus. These shells are numbered so that shell number 1 is closet to the nucleus.

Electrons vary in the amount of energy they have. The shell closet to the nucleus fills up with the lowest energy electrons first, and then each subsequent shell fills with higher and higher energy electrons, one shell at a time.

Each Element Has a Unique Number of Protons

For Example: Hydrogen, the simplest atom, has an atomic number of 1, corresponding to its single proton.

Magnesium has an atomic number of 12, corresponding to its 12 protons. The term refers to a particle that is electrically neutral.

The atomic number is also equal to the number of electrons in the atom, resulting in a net charge of zero.