What is DNA Translation Simplified

Understanding the Basics of DNA Translation

To understand the process of translation, we will first examine the genetic code, which specifies the relationship between the sequence of nucleotides in the mRNA and the sequence of amino acids in a polypeptide.

During Translation, the Genetic Code is Used to Make a Polypeptide with a Specific Amino Acid Sequence

The ability of mRNA to be translated into a polypeptide relies on the genetic code. This code is contained in the sequence of bases in an mRNA molecule.

The code is read in groups of three nucleotide bases known as codons. The sequences of three bases in most codons specifies a particular amino acid.

Because there are 20 types of amino acids, at least 20 codons are needed to specify each type. With four types of bases in mRNA
(A, U, G, and C), a genetic code containing two bases in a codon would not be sufficient, because only 16 different codons would be possible.

When the number of possible codons exceeds 20, the genetic code is said to be degenerate. This means that more than one codon can specify the same amino acid.

For Example: the codons GGU, GGC, GGA, and GGG all specify the amino acid glycine. 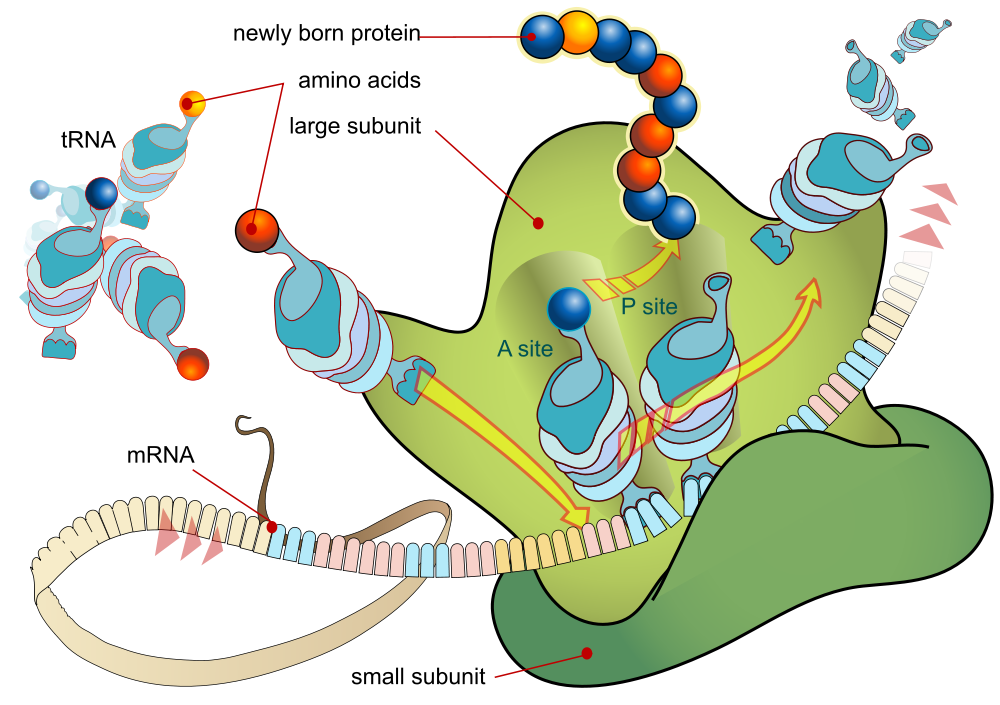 1. Messenger RNA (which is made by the DNA transription mRNA) is bound to ribosome with the start codon (AUG) at the P site. A transfer RNA molecule with the amino acid methionine (M) and the anticodon UAC has bound to the exposed start codon. The codon UCA is exposed at the A site.

2. A second transfer RNA molecule, with the anticodon AGU and the amino acid serine (S) has bound to the A site. The 2 amino acids are close enough to form a peptide bond between them.

3. A peptide bond has formed between M and S and the peptide is bound to the A site. The methionine transfer RNA leaves, and the P site is exposed.

4. The ribosome has moved along the messenger RNA one codon, bringing the peptide to the P site. This exposes the A site and the next transfer RNA, carrying alanine (A) is about to bind.

1. The ribosome then moves 1 codon down the mRNA in a 5′ to 3′ direction. This is achieved by a translocase enzyme. As the process of ribosome translocation continues, the “old” tRNA is released to bind another amino acid and go in search of a new codon. The binding of a new aminoacid is mediated by an enzyme called amino-acyl-tRNA synthase.

Termination Steps:
1. The process continues along the mRNA until a stop codon is reached. While there is no tRNA for a stop codon, there is an enzyme called release factor which cleaves the polypeptide chain resulting in a new protein.

2. Finally, the entire complex is disrupted, the ribosome separates and the mRNA is released to be used again or degraded. Translation occurs at multiple sites along an mRNA so that many ribosomes can be seen by electron microscopy bound to a single mRNA strand with many polypeptide chains forming from each.