As we know, kissing is one of the most performed actions done today by humans and some animals alike. Everyone loves a nice wet one! But have you stopped and considered, why do we do this in the first place. When you kiss someone, if you have, is it because you’re reacting off of instinct or is it because your best friend my have described as the best thing he/she has ever experienced. Either way, before placing a wet one on the next person, you should read this article and find out why you swap such a large amount of saliva in the first place.

If you’re familiar with how a mother bird feeds it young, then you know that before she gives them their meal, she’ll pre-chew the food and then feed it to them using her mouth. (It’s not like she’s going to use her wings to grab a worm).

Well, according to many philematologists, agree that it began as a way for mothers to pass on pre-chewed food to their infants. But, obviously since human beings have arms and hands, this form of nurturer is not needed nor necessary any longer.

So Why Kiss Now

I’m not going to rule out that people kiss just because it feels good, but couldn’t there be a deeper meaning to why “lip locking” is so fascinating.

Ever wonder why women base so much off the first kiss? For most women, the first kiss is actually more instinctual than they realize. Once again, “is it important because their friends say it is?” or, “Do they realize that this information exchange known as kissing, might be the  preliminary exam to see if the current mate would be a correct choice for procreation.

Marissa Harrison, an assistant professor of social sciences at BMCC, suggests that men and women kiss for dramatically different reasons. “Basically, women use kissing as a mate assessment and bonding mechanism,” Harrison says. “Men use kissing as a means to a sexual end.” The differences, she says, are a matter of evolutionary adaptation.

Given their biology, women “are preprogrammed to make more prudent mate choices than men,” she explains. “A woman produces one egg a month, if that, and then takes nine months to give birth, all of which entails a profound reproductive investment. So she is looking for a partner who will stick around.” Men, by contrast, produce millions of sperm daily and “then basically contribute only a one-night stand to become a parent. Their reproductive investment is relatively negligible.”

To put this simply, For women, kissing is a means of gauging a partner’s suitability as a mate. For men, kissing is secondary to distributing their genes as often and widely as possible. In fact, significantly more men than women told the researchers that they would willingly dispense with kissing altogether during sex. 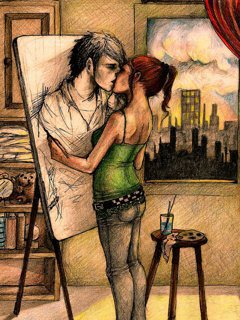 Gordon Gallup Jr., a psychologist, in the study of reproductive competition, at the State University of New York at Albany who in 2007 examined how kissing was perceived by more than 1,000 undergraduate students, found that the average female sees kissing as essential. Females “wouldn’t dream” of having sex with someone without kissing first and were also much more likely to emphasize kissing during and after sex, says Gallup. It suggests that “females are much more prone to use kissing as a mate assessment device,” he says. And even within an ongoing relationship, they use kissing as a way to update and monitor its status, he says.

Bambi Turner, a contributor at Discovery, suggests that perhaps the greatest evidence of the psychobiosocial theory of kissing lies in the relationships between bonobo monkeys, which share 98.7 percent of their DNA with humans. Baby bonobos get nourishment from their parents, who feed them using a mouth-to-mouth technique. As they grow, the bonobos frequently kiss one another to ease tensions or reconcile after disagreements. They also may kiss as a sign of friendship, or even during the mating process.

She goes on to say that kissing a new partner stimulates dopamine production, which creates a sense of desire and excitement. As people kiss the same partner over time, the brain releases oxytocin instead, which helps to instill a sense of bonding and attachment.

Research by Wendy Hill, a neuroscientist as well as provost and dean of the faculty at Lafayette College, has shown that kissing reduces levels of the stress hormone cortisol. In a study to be presented on Valentine’s Day at the annual meeting of the American Association for the Advancement of Science, Hill and her coauthors report that a second study, also small, found that the longer the relationship between the two parties, the more cortisol levels declined. (So did cortisol levels in the control group of couples who talked softly rather than kissing.) Hill is also studying the role of oxytocin, a social-bonding hormone that promotes calm and attachment; previous research has suggested it rises during kissing, at least in men.

Arriving at an Answer

So it seems, when dealing in relationships, a kiss is not only a means a  affection, it is an update of how well or not things might be going, or to calm down hostile situations. For those not in relationships, kissing may be used to choose the correct mate, or for some, to be able to just procreate altogether.